Note that unless the bob moves, the speed of the clock will not change.

If your wood stick pendulum has 2 nuts below the bob -

The reason for 2 nuts is that after the top nut is adjusted, bringing the bottom nut up to it and applying a little tightening between the 2 nuts they will lock and not work themselves down over time. To adjust the bob, first lower the bottom nut a few turns, use the top nut to push the bob up or to allow it to slide down on the stick, and then while holding the top nut, bring the bottom nut back up and snug it up to the top nut.

​When moving the nut up, the nut will push the bob up on the stick, but when coming down with the nut, you need to make sure that not only the nut, but the bob has moved. If you see a gap between the nut and the bottom of the bob - gently hold the stick and pull down on the bob until the bottom of it once again rests on the nut. For most wood stick pendulums 1 turn (360 degree) turn of the nut is a 1/2 minute difference in a 24 hour period. However, the difference for one turn can be as much as 3 minutes per day.

For most pendulums, one complete turn (360 degrees) of the nut below the bob will change the speed of the clock by 30 seconds in a 24 hour period. This hold true for most modern metal/lyre pendulums. For many antique pendulums one turn is equal to 1 minuted per day. For some pendulums the rating nut may have several turns before it starts moving the bob. If there is play between the nut and the bob, remember that the bob must move to change the speed of the clock.

To find out what 1 turn of your Rating Nut changes:

1. Set the time to a reliable clock or watch.

2. Wait 24 hours. Write down on a piece of paper how many seconds the clock is off.

3. Turn the nut 1 turn (360 degrees) in the proper direction. Front of the nut to the right is faster, to the left is slower. (Make sure bob moves)

4. Re-set the time again to the same reliable clock or watch.

5. Wait 24 hours. Note how much closer the time is in relation to the correct time.

You now know what 1 turn of your clock's pendulum nut changes.

Over the next week you should be able to fine tune this setting.

Once your pendulum is set to the proper length you clock should keep almost perfect time.
Remember: Whenever you adjust the pendulum, reset the time.

Check the clock again in 24 hours. Continue until the clock is keeping the correct time. 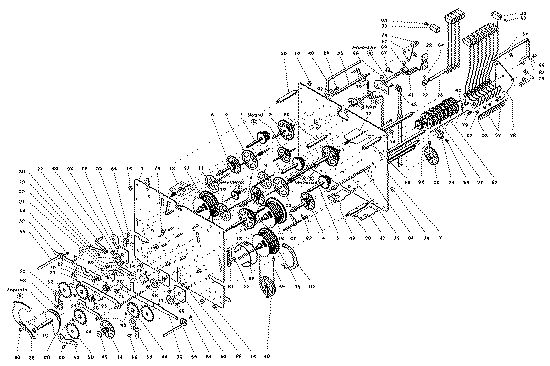 House calls for any weight driven floor clock within our area.

To adjust the hands: (Always move hands slowly and stop immediately if you feel any resistance!)

Always use the minute hand to adjust the time. The minute hand is tied in to the gearing, so as you advance the minute hand the wheels advance. On almost all modern grandfather clocks and many antiques, the hour hand is only friction fit on its arbor. When you move it, it slides without changing anything else. This will cause the hour hand to be out of agreement with the hour strike. Most modern grandfather clocks use either Hermle, Urgos or Kieninger movements. Where Urgos and Kieninger movements allow the hands to be moved counter-clockwise, Hermle movements should only have their hands moved clockwise. *** In any case, whenever the chime or strike start running stop moving the hand immediately until it finishes its run!

If to the right of the numeral three on the dial you see a small arm protruding through a slot in the face;

a. If the "Silent" position is at the top of the slot, once the arm is set to this position it most likely will be safe to advance the minute hand slowly forward until you reach the proper time without needing to stop and wait at every 15 minute point for the ringing to finish.

b. If the "Silent" position is at the bottom of the slot, you might as well leave the switch in its present position as if you want to move the minute hand forward, you will need to stop at every 15 minute point to let the chime and strike train finish its run. However, if you want to go backward, you should be able to do so, but do it slowly and stop if you feel any resistance.

If after you turn the chime back on the chime is not chiming properly, it should reset itself within the next full hour.

c. If your clock doesn't have a "Silent" switch or its in a different location;

Only move the minute hand clockwise and stop at every 15 minute point until the chime and strike stop running.

Never move the hour hand unless you know that the movement will allow it. Move the minute hand forward stopping at each quarter hour and allowing the chiming to finish before advancing to the next quarter hour. (When moving the minute hand always do so slowly being prepared to stop immediately if any resistance is noticed!)

If your clock is not chiming the proper quarter hour:

On Modern clocks and most Antiques: This is usually due to the minute hand falling off and being placed back on the square arbor pointing to a different direction than it was prior to falling off. To correct this issue; advance the hand around the dial allowing the clock to chime each quarter. When you hear the clock strike the hour, remove the minute hand and replace it on the square arbor pointing to the "12" on the dial.

If your clock stops:

Many times the problem with a pendulum clock that stops working is that the clock is out of beat. Most modern movements have a self adjusting verge. This means that you can very easily correct this issue. If you notice that the beat of the clock (the tick tock) is not even simply bring the pendulum over to one side of the case. Back off a hair and release. Let the pendulum swing as wide as possible and the movement should adjust itself to a perfectly even tick tock. This assures that optimum power is getting to the pendulum from the weight.

Remember to keep your clock on the proper service schedule! (3 year intervals)

The Clock Doctor ® © ALL RIGHTS RESERVED.

If your clock is not striking the proper hour:

The moon dial advances one click per day (two for Hershede and most antiques).Find a calendar or local newspaper (usually on the weather page) with the phases of the moon listed for the month.Find the closest Full or New moon. Set the moon dial to correspond to the most recent of the two. For a full moon, center the moon on the dial under the 15. For a new moon, adjust so no moon is visible . Now advance the moon dial one click for each day that has passed since (two for Hershede and most antiques).

Adjustments for most pendulum clocks.

Hanging Tubular Bells - The following sequences list bells left to right with #1 as the longest tube.

Count-wheel movements are problematic in that whenever the strike train runs out of power before the time train does, the strike will be off when the clock is re-wound. The strike train has to run through the sequence that is determined by a notched wheel (the count-wheel). If the clock strike is out of sequence it must be manually put back into the proper relationship of time and strike in one of two ways. If your clock has a trigger wire: Many count-wheel movements have a wire which hangs down from the trigger arm which can be used to run through the sequence of strikes until the strike agrees with the time. Look inside the case for a thin wire hanging down from behind the face (usually to the left side of the case, it may be an inch or more back from the face on some clocks). Lift the wire to trigger the strike and immediately let go. Repeat this process as necessary. If your clock doesn’t have a wire: If your clock strikes the half hour when the minute hand is on the 12 and strikes the hour when the minute hand is on the 6 there are two ways you can correct this. You can either remove the minute hand from the arbor and reposition it facing the opposite direction or you can bring the minute hand to the 6 and before the clock finishes striking out the hour count move the hand to the 12 (if you feel any resistance never force; stop, backup and try again). Now that the clock is striking the hour when the minute hand is on 12 proceed to the next step. To correct the hour strike: Move the minute hand to the 6 and let it strike the half hour if your clock does so. Then move the minute hand to the 12 counting how many times it strikes. Next, slide the hour hand to the corresponding number on the dial. Now, move the minute hand around the dial stopping to allow the clock to complete its strikes until you arrive at the present time. You’ve done it!

Your clock's movement is a mechanical device which requires a service schedule to keep it running. You may relate the workings to your car's engine. As with your car's engine, your clock's bearing services are metal on metal. The main determining factor in how many years the parts last is keeping the clock well lubricated by having it oiled periodically.

As time goes by oil starts to break down and dry out. By running a clock movement that isn't sufficiently lubricated you are cutting short the life of the movement.

We recommend an oiling every three years for all weight driven mechanical clocks. With the proper service a well made clock movement should last many lifetimes passing down from generation to generation.